Here's a special retro review for you guys.  With a new Kirby game coming out on the Wii in less a week here in North America, I figured that I would review Kirby's Dream Land 3 for the SNES in honor of the upcoming game. 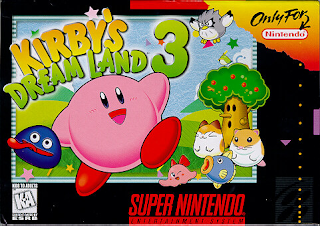 When the SNES classic was originally released in 1997, it was met with lukewarm reception.  The highly acclaimed Kirby Superstar was released less than a year earlier, and the Nintendo 64 had stolen the spotlight from the SNES by the time Kirby's Dream Land 3 was released.  Were these factors the reason that Kirby's last SNES outing didn't fare well in the reviews, or is it truly a mediocre Kirby game?

Kirby's Dream Land 3 starts off with a mysterious dark object, fittingly named Dark Matter, invading the peaceful world of Dream Land and it starts wreaking havoc.  It's then up to Kirby and his friends to stop Dark Matter and save Dream World once again.  If you've ever played a Kirby game before, the simplicity of the story shouldn't come as a shock to you, as Kirby's never had deep plots.

Once the game actually starts, the first thing you'll probably notice about it is its unique art style.  It's very similar to Yoshi's Island's art style, in the sense that it looks like a drawing come to life.  Others in the past have found it off-putting and childish, but it's actually quite charming and fitting.  The same goes for the music.  The tracks in Kirby's Dream Land 3 are some of the most catchy songs in a Kirby game, and you'll find yourself humming along with them as you play along.  They expertly add to the atmosphere and range from upbeat and happy to slow and mysterious.


When you actually start to play the game, you'll realize that the gameplay in this Kirby game is like most of the other Kirby games.  It's a 2D side-scrolling platformer in which Kirby can suck up enemies and copy their abilities, which range from turning into a ball of spikes to breathing air cold enough to freeze anything that stands in his way.  Kirby also retains his ability to float for an infinite amount of time, which can make certain parts of the game easier since you can just float above them.

The animal friends from Kirby's Dream Land 2 also make an appearance here, with the addition of three new friends.  These include Coo the Owl, Rick the Hamster, Kine the Sunfish, Chuchu the Octopus, Nago the Cat, and Pitch the Bird.  Each of these friends has a special ability that Kirby wouldn't normally be able to do.  Take Chuchu the Octopus for example.  She can cling onto the ceiling and walk around on it, which is something Kirby can't do on his own.  Along with special abilities, each animal friend also modifies the ability Kirby currently has copied.  Continuing with Chuchu example, if Kirby has the fire ability copied, then you could use it to float up using Chuchu like a hot air balloon.  While the animal friends are a nice addition and fun to experiment with every now and then, you'll find yourself either sticking to one or two the entire game, or just avoiding them completely.  Despite their special abilities, they don't really add much to the overall experience, and you'll find that they generally slow you down, with the exception of Coo and Kine.


In addition to the animal friends, Kirby's Dream Land 3 also has a multiplayer aspect.  A second player can join in as a blob named Gooey, which plays exactly like Kirby.  The only issue with the multiplayer aspect of the game is that if Kirby is using an animal friend, then Gooey can't, and vice versa.  It comes off as strange considering there are more than enough animals for the two players to share.  It's even stranger when you consider that Kirby Superstar, which came out a year earlier, also had multiplayer, and did it better.

The game itself is broken up into five main worlds with six levels and one boss in each world.  They're your typical Kirby platforming stages, but this time, each level has a hidden task for you to complete.  When you find and complete each task, you're rewarded with a Heart Star.  Finding these Heart Stars isn't necessary to finish the level, but it is necessary if you want to see the real ending.


The overall difficulty of the stages in Kirby's Dream Land 3 is a little easier than the average Kirby game, which is to say, extremely easy.  This time around, Kirby can take up to ten hits before dying, and healing items and extra lives are a common sight throughout each level, which are then followed up by a minigame for even more health or another extra life.  There will be numerous times throughout the game where you come across a Maxim Tomato, but your health bar will be full.  The only time you may find yourself dying would probably be when you're speeding through a level and not really caring about the enemies in your way.  Even if you do die, you most likely won't be worried about getting a game over since extra lives are so abundant.

In fact, the only real difficult part of the game is in regards to the Heart Star collecting.  In each world, there's one level where you have to play a kind of quiz to collect a Heart Star.  Usually these quizzes move so quickly that there's no way to truly know what the answer is without cheating.  If you're going for 100% completion, it becomes frustrating towards the end that the actual game is so easy, but the quizzes are frustratingly difficult.

Despite the easy difficuly of the main game, there is an extra boss rush mode that provides a challenge.  Here, you have to fight through all the bosses in the game over again without healing, having copied abilities, or using your animal friends.  It is strictly single player though, so a friend can't join in on the action.  It's an entertaining minigame to play once you've beaten the game, and it's always fun to see if you can you defeat all the bosses without getting hit.

Concluding Thoughts
While Kirby's Dream Land 3 does have its flaws, it is a solid entry into the Kirby series. The difficulty may not be where you want it to be and the animal friends may not have as many uses as one would wish they had, but that doesn't stop the game from being fun. The traditional Kirby gameplay combined with an interesting art style and catchy tunes creates a fun adventure that every platformer fan should experience. It may not be Kirby's most famous outing, but it's certainly one of his most fun.