Sorry this review is late guys. It was a lot harder to write a review for Super Mario World than I thought it would be. 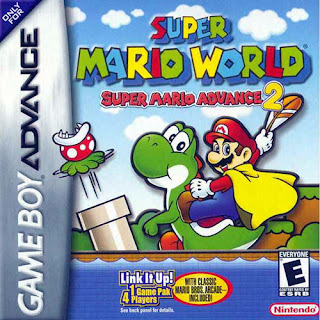 Another day, another Mario game. Back in 1991 (1990 for Japan and 1992 for Europe and Australia), gamers across North America were graced with the release of Super Mario World. It was an instant hit, capturing the minds and hearts of gamers of all ages with its challenging yet fun levels and vibrant, colorful graphics. People still to this day say that Super Mario World is among the best of the best, not just among Mario games, but among games in general. Because of the SNES game's popularity, Nintendo saw fit to port it to the Gameboy Advance in 2001.

There's not much to say about the plot other than that it's a simple story, but Mario's never been known for complex storylines that leave the player wanting more. It was good enough in 1991, and it's good enough now. The thing that makes Super Mario games so popular in the first place isn't the story, it's the gameplay, which in this case, is near perfect.

Super Mario Advance 2: Super Mario World is a 2D sidescrolling platformer, just like all the other 2D Super Mario games. The controls are nice and tight, and the physics are perfect. You'll never feel like you missed a jump or died because of shoddy controls of floaty physics. The levels are designed excellently, and provide a good challenge later in the game. You'll die over and over again until your platforming skills improve enough to satisfy the game.


As you play through the levels, you'll fall in love with the music of the game. Because Super Mario World introduced so many iconic Mario tunes, the port obviously excels in the music department. The only problem is, the GBA can't recreate the music so it's the same quality as the original SNES title. It is a little disappointing, especially if you've listened to or played Super Mario World's original release. You can't fault the game too much for the music though, as it is a technical issue the Gameboy Advance has, and not the game itself.

Along with the music being downgraded, the graphics are a bit of a let down too. The original Super Mario World had vibrant and colorful graphics, helping engross the players in the experience. The GBA port, however, has washed out colors that make the game end up looking bland compared to the SNES game. They're fine if you haven't seen the original in awhile, but when comparing the two, you can't help but to feel a little disappointed.

Even with those flaws, there are a few aspects of Super Mario Advance 2, and the original, that allow it to stand out from the other Mario games. The first is obviously Yoshi. The SNES classic was the first Mario game to ever feature the green dinosaur, and he was granted abilities that he's never seen since. In Mario's adventure around Dinosaur Land, Yoshi is able to spit fireballs and fly, opening up numerous possibilities from a gameplay perspective. It's extremely fun to grab Yoshi and experiment with what he can and can't do.


The other major part of the SNES classic that stands out is the fact that there are numerous secrets. Most of the levels in the game have more than one exit, encouraging the player to explore and experiment. Once you find the secret exit hidden in the level, you open up a new path on the overworld map. It's not a guessing game as to which levels have secrets and which levels don't either. On the overworld, levels are either yellow or red circles. Yellow circles represent levels with only one exit, while red circles represent levels with two exits.

Because of the countless secrets Super Mario World holds, it has great replayability. You'll find yourself re-entering levels after you've beaten them, trying to figure out where the second exit is. Even when you're finished finding all the secret exits, you unlock a special world with even more levels for you to play through. Casual gamers and perfectionists alike will find themselves playing Mario's outing on Dinosaur Island for hours on end trying to figure out if they've discovered everything in the game.

In addition to the secret exits, each level includes some Dragon Coins. While they start out easy to find and collect, they're devilishly hidden and rather difficult to collect once you get toward the end of the game. It's just one more aspect of Super Mario World that will keep gamers playing.