Sorry, I know I said I'd have this up yesterday, but it took me longer than I thought. Because of that, you get this review before the scheduled 2:30 update! 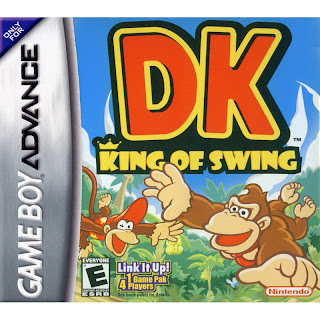 After Rareware and Nintendo split up in the early part of the 2000s, Donkey Kong and his friends starred in a number of experimental and gimmicky games for nearly a decade. The ape went from a party games, to rhythm games, to racing games, to platformers with a twist. It felt like Nintendo didn't know what to do with the franchise, and just tossed it from developer to developer, hoping to find something that would stick. DK: King of Swing was one of the games released during that period of time, and it stands out even among the other Donkey Kong games released in the first decade of the 2000s just for its unique gameplay.

It's not the most interesting story of all time, and it comes off as extremely childish and cheesey, even for Nintendo standards. The writing isn't the greatest either, which is a disappointment after Rareware's funny and snarky writing they included in their Donkey Kong games. Though, at the very least, it does give you reason to play through the game. But the story isn't what makes DK: King of Swing stand out from the rest of franchise; it's the gameplay and controls.


The simple yet unique controls allow for some interesting level designs. Instead of having levels that go from left to right or right to left, the levels in DK: King of Swing are mainly vertical, making Donkey Kong travel from the bottom of the screen to the top of the screen. There are also a few simple puzzles that revolve the mechanic, like spinning on a valve to open up a new path.

Paon also does a nice job of keeping the levels nice and fresh. With the entire game revolving around a simple gameplay mechanic, the game could have possibly turned repetitive after the first few levels, but the developers added new and interesting twists throughout the game, such as wind throwing you off, underwater levels making the jumps more unpredictable, and ice pegs making Donkey Kong slip as he tried to grab them. The difficulty curve is nice too, with the later levels causing you to get hit and fall off ledges over and over again. However, the levels are also a little on the short side, though. They don't take very long at all to get from beginning to end, even if you tried to collect everything in the level.


The game itself is short too. There are only five worlds in the entire game, and each world only has four levels, bringing the total number of levels to twenty. Luckily, there are extras to collect that extend the length of the game. In each level, there's a crystal coconut and a medal hidden. Collecting all of them unlocks additional content for you to enjoy after the main game is finished, including a few multiplayer modes.


The multiplayer modes range from races to battles, and they're a fun way to pass the time when you're finished playing the main game. In multiplayer, you have the option of playing as various characters, including Diddy, Dixie, and Funky Kong. Each character has their own pros and cons, and you can even unlock more characters in the multiplayer by playing a mixture of the multiplayer mode and the single player mode. And if you don't have anyone to play with, then you can play the multiplayer games by yourself against the computer.

Although the gameplay itself is memorable, the music sadly isn't. It's pleasant to listen to while you're playing the game, but nothing will stick out and you won't find yourself humming anything along with the game. By the time you turn the game off, every song you heard in the game will be an obscure memory, and you won't be able to recall the beat.

Unlike the music, the graphics of DK: King of Swing are memorable, but they aren't exactly fantastic. Instead of the more realistic style that Donkey Kong had become known for, King of Swing opted for a more cartoony style. It looks nice, but it feels generic and not like Donkey Kong at all. Everything is colorful and vibrant, though, so one can't knock it too much.

Concluding Thoughts
Overall, DK: King of Swing is a good game with unique gameplay that sets it apart from the rest of the games in the Donkey Kong series, but that's about it. The game is short, the story isn't that great, the music isn't memorable, and the art style chosen feels generic and un-Donkey Kong like. The inclusion of a multiplayer mode and extras does boost the game a bit, but it's nothing substantial to make the game better than just good.