Sorry I didn't have this up on Saturday! Like I said in Friday, it's been a busy week. Hope you guys can forgive me! I'm going to be back to my regular schedule starting this week, though. 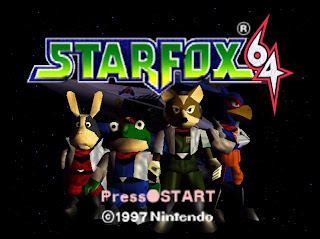 When Star Fox 64 released on the Nintendo 64 back in 1997, it was loved by new and old fans of the series alike. It took the best elements of the original Star Fox from the SNES and combined them with aspects of the cancelled Star Fox 2 along with new and original elements. It was praised by critics, and many fans to this day consider Star Fox 64 the best game in the series. Does the best game in the series stand the test of time, or has it aged horribly over the years?

In Star Fox 64, you play as an anthropomorphic fox fittingly named Fox McCloud. Fox, along with three of his friends, Slippy Toad, Peppy Hare, and Falco Lombardi, make up a team called Star Fox. The four of them together, with the help of others along the way, must stop the evil scientist Andross from taking over the Lylat System, the solar system in which they live. You travel to different planets and areas within with the Lylat System, defeating Andross' minions and slowly making your way to the evil scientist's based on the planet Venom.

Like most stories in Nintendo games, it takes a back seat and you don't really notice or pay attention to it as you play through the game. The main reason people praise the Nintendo 64 game is because of its gameplay, not because of its story.

The gameplay in the Nintendo 64 Star Fox game is pretty simple. Most of the levels are on rails, with you always being forced to move forward, but you can still move Fox's Arwing, or whatever vehicle he's in at the time, around the screen to dodge attacks. Your main attack is to shoot lasers at the enemies, which can be upgraded twice from the basic stage throughout the levels. You're also given a limited number of bombs, which practically wipe out all the enemies on screen. There are also gold and silver rings scattered around each level. Both of these rings heal some of your health, but the gold rings increase your life bar by a significant amount if you collect three of them.


The best thing about the gameplay is that it's perfectly paced. There are very few moments of downtime where you're waiting for something to happen, but you never feel overwhelmed by the number of enemies. The difficulty is perfect too. Star Fox 64 basically has difficulty settings, but in the form of branching paths. Most levels have more than one exit, with the standard, normal exit leading to an easier level, while the hidden exit leads to a harder level. If you take the path that leads to the harder levels, you'll find yourself getting damaged and even dying multiple times, but it's all fair. You never feel like the game is cheap and causing you to die due to faulty controls or being ambushed out of nowhere.

The only issue with the main game is that it is on the short side. You only have to go through seven levels to reach the end of the game, and each level is relatively short. You can even go back and find the paths to all the levels in one afternoon. It would have been nice if there were a few more levels thrown into the mix just to lengthen the game some.

However, if you are finding Star Fox 64 on the short side, you can always go into the multiplayer mode with up to four players. There are three different modes for you to play in: Point match, battle royal, and a time trial. Each mode has their own set of rules and are nice and varied to keep multiplayer interesting. There also multiple arenas you can play in, and you can even unlock multiple vehicles to use in the single player mode.

The presentation in Star Fox 64 is great. Although the Nintendo 64's draw distances are the greatest, you can still see far enough off in the distance to react in a timely fashion. Each level is also extremely unique, without a single world blending in with another. Even the levels that take place in space are able to differentiate themselves from one another, such as Sector X, Sector Y, and Sector Z. Although they sound the same on paper, they're each memorable in their own way. However, the textures are bad even for the Nintendo 64.


Along with the graphics, the music is among the best on the Nintendo 64. It's full of memorable tunes that are still stuck in people's heads fifteen years later, ranging from the intense Star Wolf battle theme to the epic Venom theme. It's also notable that Star Fox 64 has voice acting. While some of the lines are cheesy, the voice acting overall is on the better side and gets the job done. It's hard to imagine playing the game without the voice acting.

Concluding Thoughts
Star Fox 64 is one of the best games on the Nintendo 64 due to its fast paced gameplay, great music, and fun multiplayer mode. It would have been even better if there were a few extra levels thrown into the mix to increase the length of the game, but the short length doesn't take away from how fun it is. If you own a Nintendo 64 or a Wii and don't know Star Fox 64, you should go buy it this instant. It's a must own for any gamer.