Sorry this is so late today! 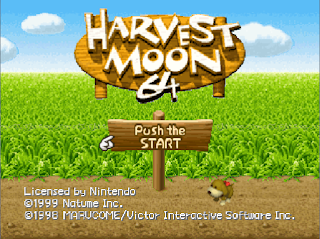 Like every other Harvest Moon game, Harvest Moon 64 is mainly a farming sim. However, you don't start off with your very own farm right away. Before you take control of your character, you learn that your grandpa has passed away and that you inherited his farm. When you move in to your new home, you discover the farm is a mess, with rocks, weeds, and tree stumps scattered across the soil. When you clear enough land, you're ready to start farming, which is your main source of income.

Farming crops isn't the only thing you can do at your new home. When you save up enough money, you can buy cows, chickens, and sheep, which can provided you with even more income. You have to be careful with animals though, as they can get sick and die, forcing you to buy a new animal if you don't want your daily income to drop. Once a day, you need to feed your livestock and check on them to make sure they aren't getting sick.

Farming crops and tending to your animals are two things that you find yourself doing every in game day to keep your income up. After a certain point in the game, the daily tasks on your farm can take quite awhile in Harvest Moon 64 time, and you'll find yourself wishing that there was a faster way. It can also get a little repetitive the further you get in the game, as the in game days only last around five to six minutes, so you end up doing the same thing every five or six minutes. It is surprisingly fun to farm and take care of animals though, even if it does get repetitive.


When you aren't farming, there are numerous other quests for you to do, with the most notable being finding a wife. There are five single young women in Harvest Moon 64 that are available for you to marry, and each has their own distinct personality. They all like and dislike different things, and it is fun to find out what your ideal girl likes. No matter what other duties you have that day, you'll find yourself making time to find gifts for the girl you want to marry. As time progresses and a girl starts to like you more and more, their dialogue starts to change to reflect their feelings toward you. In the beginning of the game, the girls are indifferent, only really talking about the businesses they're a part of. But as their feelings for you grow, they start to become more relatable and open about different things. It's surprisingly rewarding to see a girl go from not caring about you to being infatuated with you.

The single girls in town aren't the only characters in game with personalities that evolve over the course of the game. Every character in the village starts off as nice, but not very personal. The more you talk to them, the more open they become when you're around. Just like the girls in the game, it's a wonderful experience seeing the villagers transform from not caring about you to becoming your best friend.

In addition to wooing a girl and getting to know the villagers, there are festivals every now and then for you to participate in, ranging from horse races to New Year's festivals. Various people in the village you live in will notify you of a festival a day or so in advance, giving you no excuse to miss out on one. Some festivals are more interactive than others, but they all end up being a fun distraction that breaks up the repetitiveness of the game overall. Nearly every character in the game is present at most festivals, allowing you to talk with villagers you normally wouldn't interact with.

If that's not enough for you, there are various other things for you to do out in town or around the world. One of the many other things you can do is expand your house by chopping wood and talking to the carpenters. Even though most of the expansions don't affect the game at all, it is something else for you to strive for if you don't want to marry a girl or become the richest guy in town. Yet another example of something you could do to pass the time is learn recipes from other villagers. To do this, you have to give specific items to specific villagers, and sometimes even during specific times of the year.


Like house expansions, recipes don't have that much affect on the actual game, but it is something extra for you to do.The quests just listed are only a few of the fun sidequests you do in Harvest Moon 64. The game can go on forever if you want it to, and there are more than enough sidequests in the game for you to experience to keep the game going on forever. This review would go on for much longer if it actually listed everything you could do in the game.

Everything about the gameplay isn't perfect though, and there are a few minor issues. For example, when you're farming or getting ready to sell your crops, you constantly have to go in and out of the menu to switch items. While it's nothing game breaking, it does get a little tedious having to pause and switch items every time you want to do something different. Plus, sometimes it takes the game awhile to return to the main game after being in the pause menu, which gets frustrating when you want to finish your daily chores as fast as possible. It is kind of disappointing that you can't switch items in real time, especially considering you can put items in your bag without opening it up by pressing C-Up.

Even though the gameplay of Harvest Moon 64 is among th best on the Nintendo 64, the graphics aren't. Despite everything in the game being colorful and vibrant, there are quite a few textures that are extremely blurry. There are also parts of the world that don't load right when you enter a new area, causing trees and other objects to randomly appear when you get close to them. These graphical problems tend to be on the walls of worlds, so it's nothing too major. Unlike the graphics though, the music in the game is superb. There are catchy tracks in every location, and the developers and composers did an excellent job at fitting each song to each situation.

Concluding Thoughts
Although Harvest Moon 64 can get a bit repetitive as the game progresses, the gameplay is addicting and fulfilling enough that you can overlook that tiny flaw. The game is full of things to do and see, allowing players to overlook the minor annoyances and focus on the great aspects. And even though it's not the best looking Nintendo 64 game, the overall feel of the game, coupled with the music, makes it an endearing and vibrant world.