Sorry this is so late. My internet was down all day. 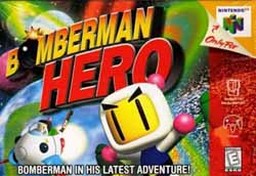 Bomberman Hero's story is quite simple. Princess Millian of Primus Star gets kidnapped by the Garaden Empire, and she sends her robot, Pibot, to go inform Bomberman of what's happened. When Pibot reaches Bomberman, the two start traveling together to save the princess. Even though it's simple and nothing that bad, I do have a problem with it. It feels like Hudson tried to make the story more dramatic and epic than it really was. Cutscenes are common throughout the game, but nothing happens in them. The writing is pretty bad and cheesey too, which makes the cutscenes even worse to sit through.

But the meat of Bomberman Hero isn't its story; it's in its gameplay. The second Nintendo 64 Bomberman is a 3D platformer like many other platformers during the era, but it isn't an open world platformer like Banjo-Kazooie or Super Mario 64. Instead, it's like old 2D platformers. You're put on a very narrow and linear path and you have to get from point A to point B by making your way over obstacles and through enemies. Although the main objective is to get to the end of the level, there are also other objectives. You rack up points as you kill enemies and collect gems, and when you finish a level, you're given a rating of one through five, with five being perfect. When you finish a world, it adds up all the ratings you got and gives you a medal based on how well you did in that world.

Other than getting a good rating, there are reasons to go back and play through some levels. There are two or so levels in each world that have more than one exit. Taking only one exit and never going back to find the second exit will cause you to never play a level. However, the game doesn't tell you what levels have multiple exits until you finish the level and you notice you've skipped a different level.


Not all the levels are getting from point A to point B, though. There are a few levels where you have to explore and collect four golden key like items to unlock the door leading out of the level. The only problem with these levels is that fact that they're not very large and it doesn't take long at all to find all four gold keys. They all end up being just as linear as the other levels, you just have to make sure you pick up the gold keys as you go along.

You only have one attack in Bomberman Hero, and that's to throw bombs. There are variations to the bomb attack, though. You can throw bombs normally by pressing B, throw multiple bombs at once by holding and then releasing B, or set bombs on the ground and then kick them at enemies by pressing R. You can also upgrade your bomb attack by collecting gold plates with bomb images and fire images in each level. The gold plates with the bomb images allow you to throw more than one bomb in a row, while the gold plates with fire images makes the explosion bigger.

Although it doesn't sound like much, fighting enemies never gets boring and it stays fun throughout the entire game. The enemies never really get difficult, though, with most of them going down in one hit even in the later levels. A lot of them are even stationary and don't attack you. They just sit around and wait for you to throw a bomb at them. Luckily, some of the bosses are difficult and do give provide a nice challenge.

If you think the enemies are too difficult for whatever reason, Hudson allows you to improve your life bar. Gems aren't only there to get you a good rating at the end of a level. If you collect a certain number of blue gems, you can take one more hit than normal. There is a maximum of eight for your life bar, though. Even though it's a nice idea, it doesn't work too well. Every time you quit playing, your life bar goes back to default and the game erases the number of blue gems you've collected. You could spend hours collecting hundreds of blue gems to get your life bar up to eight, only to find that progress erased when you start playing again. You end up not even worrying about collecting blue gems for life because you know it will just reset when you turn the N64 off.


Bomberman Hero does have good replayability because of the rating system in each level, but there is one glaring omission. The Bomberman series has been known for its multiplayer, and Bomberman Hero doesn't have any. It doesn't really make sense as to why Hudson would leave it out, considering Bomberman 64, which came out before Hero, had multiplayer.

The graphics are nice and colorful, but it's nothing special at all. It's not the best looking game on the N64, nor is it the worst. In terms of visuals, the backgrounds stand out the most, and not for the right reasons. They look like they were blown up a couple of times, so they're all out of focus and pixelated. The music on the other hand is nice and the game has some stand out tracks. It's nothing that will top "Best N64 music" lists, but it's something.

Concluding thoughts
Bomberman Hero is a mediocre game. It has some good ideas, but they never really amount to anything. The game overall is on the easy side, and the levels don't stand out from one another. The game has some nice replay value, but it lacks one of Bomberman's most notable aspects - multiplayer. On top of that, the story tries way too hard to be epic or better than it really is, causing it to be more annoying than anything. All this while the graphics are nothing special, and the backgrounds look bad even for a Nintendo 64 game.