I feel like I'm apologizing with every review I post. I thought I would have this up yesterday, but I didn't. Sorry! 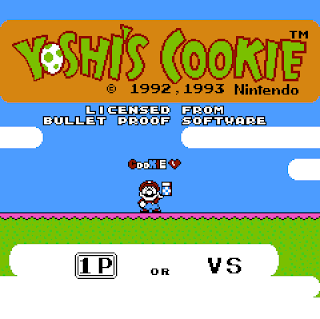 After the SNES was released, Nintendo shifted a lot of their focus from the original Nintendo Entertainment System to its successor. That doesn't mean they stopped developing games for the NES completely, though. Nearly two years after the Super Nintendo hit store shelves, Nintendo released a puzzle game for the NES called Yoshi's Cookie. Over the years, it's seen multiple re-releases on the SNES, Gamecube, and Wii.

Like I previously mentioned, Yoshi's cookie is a puzzle game. You have five different kinds of cookies, and they're all lined up in a grid. You have to create an entire row or column of one cookie. Once you do that, that entire row or column disappears. The objective is to clear all the rows and columns so you're left with nothing. It's not as easy as it sounds, though, as other cookies are constantly being added to the set of cookies you're working with. The more cookies there are, the harder it is to form an entire row or column of one specific type of cookie. There is a maximum of 8 rows and 8 columns in the game, and if your gird of cookies reaches one of those maximums, you lose.

There is a sixth cookie in the game, called a Yoshi's Cookie. It acts a wild card, and can be part of any row or column if you need an extra cookie. Don't rely on them though, because they're rare. You have to clear a certain number of rows or columns of the same type of cookie before a Yoshi's Cookie will appear.

Yoshi's Cookie allows you to change the speed of the game if you find it too hard or too easy. Altering the speed changes how fast extra cookies will be added to your grid. It's nice to have difficulty settings, and it does kind of make you wonder why Nintendo doesn't use them today. But we're not going to get into that. The game also gives you the option to change the background music, which is nice, but there are only three tracks to choose from. All three tracks are pleasant and will get stuck in your head, but that may just be because you listen to it over and over again as you play through the game. There is the option to turn the background music off completely if you want, so there is that.

There is a time limit in Vs. mode too. If you or the person you're playing against doesn't make a move in a certain amount of time, you automatically win the round. Each time you clear a row or column, the timer resets. The first person to win three rounds in Vs. mode wins the game.

It's a nice addition to the game and it's a lot of fun to play competitively against someone in a puzzle game. It can get hectic trying to find the right kinds of cookies when you're in a rush trying to fill up your meter, and that's always a good thing.


Concluding thoughts
Yoshi's Cookie is a fun puzzle game that can get quite difficult. The addition of the Vs. mode and the option to change the speed allows for a ton of replayability, on top of just going back to just see how good you are. The music is nice, but there are only three songs in the entire game, which is a little disappointing. It's nothing amazing, but it's still a good game to play with a friend or to pass the time with.