I know this review is shorter than normal, but there's not a whole lot to say about this game. Sorry! 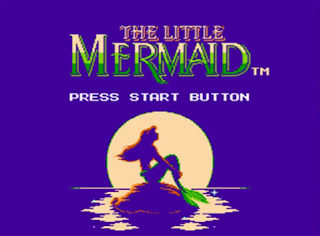 After the immense popularity of The Little Mermaid in theaters, Capcom decided to make a make a game based on the movie. It would only be the first in a long line of games based on the 1989 film, spanning from consoles like the NES and Gameboy all the way to the Nintendo DS, developed by companies ranging from Sega to Buena Vista to Left Field Productions. Does this original Little Mermaid game manage to capture the magic and excitement of the movie, or does it fall flat like countless other games based on movies?

The Little Mermaid for the NES starts out just like the movie. Ariel has fallen in love with Eric, and Ursula turns her into a human. However, Ursula doesn't steal Ariel's voice, and one day, Flounder, Sebastian, and Scuttle inform her that Ursula has taken over the sea. Ariel tells Eric that she's a mermaid before transforming back into one, and sets off on her journey to save the sea.

It's a simple storyline that follows the movie pretty well, but with a twist. If you're a huge fan of the movie and you wanted to see the plot followed exactly, you probably won't be a fan of it, but for those who are just fans of the movie and looking for a game based off of it, it's enjoyable enough.

You experience the story through cutscenes with large pieces of spritework accompanying the text, and it is very pretty to look at. The characters look like themselves, and the environments in each cutscene stand out and are pleasing to the eye. Eric looks a little weird in the cutscenes he's in, but not weird enough to detract from each scene.


The graphics during the game are extremely well done too. Each area looks unqiue, and there's a level of detail that very few NES have. Even though it only uses a few colors total, Capcom made it seem like there was a large variety of colors used throughout the game. It's definitely one of the best looking games on the NES.

The game itself is a 2D sidescroller, like many other NES games. The main thing that sets The Little Mermaid apart from other games is how you attack. Ariel can't attack by herself, and instead must trap enemies in bubbles created by her fin and then toss the enemies trapped in bubbles at other enemies. When you first start out the game, your bubble attack is weak, and it takes two swipes of the fin to trap an enemy in a bubble. As you progress through the game, though, you'll come across treasure chests with pearls inside them. If you collect the pearls, your bubble attack will get stronger along with having a longer range of attack, allowing you to trap enemies in one hit.

It's a nice gameplay mechanic that makes the game unique, but the game never gets difficult. You'll find yourself breezing through the levels, barely getting hit, only to be greeted by a boss that won't even lay a finger on you. There are hearts hidden throughout each of the levels so you can heal yourself, but you probably won't even need to try and find them.

The game is incredibly short too, even for NES standards. There are only five levels in the entire game, and you can beat each of them in around three minutes, and that's if you're looking for every item and pearl in the game. You can beat the game in under twenty minutes with cheats or skipping anything, and you'll find yourself saying, "Is that it?"


There isn't much incentive to go back and play through the game either. There are hidden items along with the pearls in treasure chests, but they only give you points, and points don't do anything other than give you an extra life. You could go back and try to get the highest score, but that's the only reason to replay the game.

Despite all its flaws in difficulty and length, the game is kind of fun to play through. It never feels like a chore to play through the levels like other games can and the controls are nice and tight. The music is high quality and it's nice to listen to, but it's all forgettable. Nothing will stick with you after you turned the game off.

Concluding Thoughts
The Little Mermaid for the NES is an exceptionally average game. While the graphics are some of the best on the NES, the game is extremely easy and short, and the music accompanying it is forgettable. There's nothing that stands out about the game other than how you attack enemies, and after you play it once, you won't have the desire to replay it again for at least a few years.