I know I said I'd be reviewing NES games, but Pokemon Snap is as short as an NES game. I think the reviews up until I finish the game I'm currently reviewing will be a bit on the short side, since there's not a lot of content to talk about. Sorry about that. 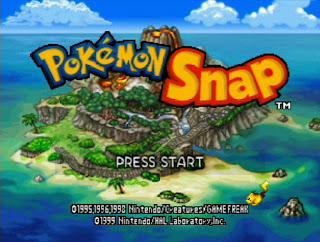 Pokemon Snap is probably one of the most loved Pokemon spin off games, up there with Pokemon Stadium. Fans have clamored for a sequel on the Wii U or 3DS since their announcements, imagining the countless possibilities the platforms would provide. Are these fans blinded by nostalgia, or his Pokemon Snap a legitimately fun game?

The N64 Pokemon spin off has six courses for you to take pictures on, and they are all on rails. Your movement is extremely limited, and you are constantly moving forward. As you move along a course, Pokemon will run or fly past you, and it's your job to take pictures of them. When you finish a course, Professor Oak will judge the pictures you took based on the size of the Pokemon, the Pokemon's pose, how centered the Pokemon is, and other special scenarios like a Pokemon in a special pose or if there's more than one of the same Pokemon in the shot. As you progress through the game, Professor Oak gives you more items that allow for better pictures and more Pokemon, such as an apple that lures Pokemon closer to you.

It sounds like a simple formula that could get boring after awhile, but it's surprisingly fun and addicting to run through each course trying to get the best picture of a Pokemon. You'll find yourself going back to each course just to make sure you took a picture of each Pokemon and to improve upon the pictures you've already taken. There also hidden and secret Pokemon that are harder to get pictures of. For example, in one course, you can force three Magnemite to combine and evolve into a Magneton.


However, the game is extremely short. As mentioned before, there are only six courses in the entire game, and they only last a couple minutes at most. On top of that, there are only 63 Pokemon in the game to take pictures of, and once you find all of them, there's little to no reason to go back into each course and take pictures again.

Pokemon Snap is also on the easy side. The game tries to add some difficulty by limiting the amount of pictures you can take on each course to sixty, but you never find yourself getting close to that total. The only way you can get close to the maximum is if you take pictures of everything on the course, including the rocks and blades of grass. There are also some Pokemon that are harder to pictures of than others, like Pokemon off in the distance or fast moving Pokemon, but you end up getting good enough pictures of them by second or third time you run through a course.

Because Pokemon Snap is a game based on taking pictures of Pokemon in their natural environments, graphics play an important role in the game. While it's not the best looking game on the Nintendo 64, they do get the job done. Pokemon look like how they're supposed to look and the environments and nice and diverse.

Although the music doesn't play as big of a role as graphics do in Pokemon Snap, it's still present in the game. The tunes you hear while traveling through each course are nice enough, but nothing ends up standing out. It's not something you end up caring about, though, as the only thing you find yourself focusing on throughout the game is getting the best picture of each Pokemon.


Concluding Thoughts
Pokemon Snap is the perfect example of a game where gameplay trumps everything else. On paper, it sounds like the Pokemon spinoff would be a mediocre game at best due to the short length, easy difficulty, okay graphics, and decent music. But when you actually play the game, you find yourself having a ton of fun and not even caring about the negative aspects of the game. Although it will only last you one afternoon, Pokemon Snap is a fun and addicting game that will leave you begging for a sequel.