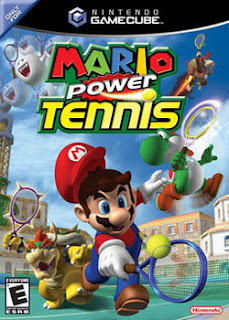 In honor of the recently released Mario Tennis Open for the Nintendo 3DS, I decided to go back and play Mario Power Tennis on the Gamecube and review it. The 2004 Gamecube was a sequel to the popular Mario Tennis on the Nintendo 64, and it was met with good reviews all around at the time. However, now it's just one game in the plethora of Mario sports titles that span across countless platforms, so does it have the gameplay to make it stand out even amongst the numerous other sports games starring Mario, or is an overall forgettable game?

Mario Power Tennis starts off with an opening sequence showing Wario and Waluigi losing to Mario and Luigi in a game of tennis. Of course the evil duo is disgruntled by this, and ends up getting trouble with the security at the stadium when they deface Mario and Luigi's pictures. It sets off an over the top series of events that's full of humor and charm, and it sets the stage for the rest of the game because that's exactly what Mario Power Tennis is -- an over the top and full of humor and charm.

Before getting into what makes the 2004 Gamecube game so over the top, though, it needs to be stated that Mario Power Tennis is a solid tennis game with tight controls and fun gameplay. There are eighteen different characters that you can control using the analog stick to move around along with using the A and B buttons to hit the ball. Each character has their own pros and cons, with some being slow but powerful, and others being fast but weak. On top of that, the game does offer both singles and doubles tennis, so you can pick whatever game of tennis you'd like to play. The combination of the controls and various and characters creates a nicely balanced game of tennis if that's all you want to play, but normal games of tennis isn't what makes Mario Power Tennis a unique sports game. It's the aforementioned over the top gameplay.

Along with the normal controls, there are special moves each character can perform called power shots. These special moves can be used for either defensive purposes to reach a ball that's out of your normal range of reach or for offensive purposes to add some extra power behind your shot. Power shots are accompanied by, you guessed it, over the top cutscenes that are full of charm and perfectly match a character's personality traits and special qualities. Shy Guy's offensive power shot, for example, will have him dance around in traditional Pacific Islander clothing before electrocuting his tennis racket with lightning, thus electrocuting the ball and shocking anyone that tries to return the ball. They are fun and they do add a nice twist to the gameplay, but they can get a little distracting at times. It is rare, but every now and then you will feel disoriented by the power shots just because your character is off screen during the cutscene.


The over the top antics of Mario Power Tennis don't stop there, though. There are various courts in the game called gimmick courts, and they're exactly what they sound like -- tennis courts with a gimmick to make the game more hectic and fun. These courts do have a lot going on, having to keep track of power shots and whatever curve ball the court throws at you, but they do their job perfectly and they provide hectic gameplay that can be addicting with friends. If you want to play the gimmick courts without the gimmicks though, the game allows you to do that. It's an extremely nice addition considering the courts look great, but sometimes their gimmicks can get too distracting.

Also, if you don't want to play just a pure game of tennis with some twists thrown in, Mario Power Tennis offers two other games you can play on the courts, and they are ring shot and item battle. In ring shot, you have the additional goal of trying to hit the tennis ball through various rings that appear over the net. The rings vary in size, and you get points based on the size of the ring you hit the ball through. The first person to either 100, 200 or 500 points wins the game.

Item battle's goal is the same as normal tennis matches, but it has items thrown into the mix to make the gameplay even more hectic. Item boxes regularly appear over the net, and when you hit one, you're given a random item. The items available are items that you would normally find in Mario Kart games, such as the lightning bolt, red shell, and mushroom, and they do add a nice twist to the game. Some are overpowered though, and you can lose or win matches solely based on what item you or your opponent got.

If you don't feel like playing tennis at all, Mario Power Tennis has you covered there too. There's an extra mode called Special Games available where you can play various minigames, such as defeating a Mecha Bowser or painting a mural on a wall. There are eight different Special Games total, and each special game has three to four different challenges in and of themselves. Most of them are fun to play, but a few are so hard that they're more frustrating than fun.


Mario Power Tennis seems to have everything covered except for the music. While the gameplay has varying options that can be tweaked to suit anyone's needs, the music leaves something to be desired. There's nothing memorable about the music and you don't even notice it while you're playing through the game. It nothing major, but it would have been nice to have something decent to listen to. On the other hand, the graphics are vibrant and colorful, with each court having a unique vibe.

Concluding Thoughts
Mario Power Tennis is an over the top, fun and addicting game, especially if you're playing with friends. However, the game can get so over the top and hectic that it gets distracting and frustrating instead of fun. On the plus side, the game does allow you turn a lot of those features off, so you're left with a fun and balanced normal game of tennis. The numerous options and game modes keep the gameplay fresh and interesting no matter how long you've played, and the large roster of characters will keep competitive players coming back and trying to master each one.