Sorry about this being about an hour late today! 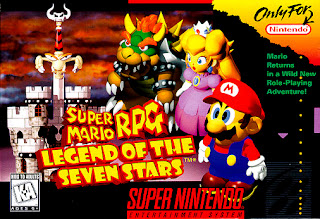 As Mario's first RPG and being his last game released for the ever popular Super Nintendo console, Super Mario RPG: Legend of the Seven Stars holds a special place in the hearts of many Nintendo fans. Not only was it Mario's first venture in the realm of turn based battles, it also introduced lovable characters that fans would love to see again. The game was, and still is, loved by fans so much that it spawned two different series that act as spiritual successors: Paper Mario and Mario and Luigi. But the question is: is it remembered fondly because of nostalgia, or is it a good game that deserves all the praise it receives?

Super Mario RPG: Legend of the Seven Stars starts off like any other Mario game. Princess Toadstool is kidnapped by Bowser, and Mario heads off to Bowser's Keep to rescue her. However, things go awry when a giant sword named Exor crashes through Bowser's Keep, sending Toadstool, Mario, and Bowser flying off in three different directions. Mario sets off on yet another journey to save the princess, but as he progresses, he meets new friends, including a cloud like creature named Mallow and a doll named Geno, and discovers that Exor is part of a gang called the Smithy Gang, which is led by a man named Smithy. The Italian plumber soon learns that Smithy and his minions crashed into something called the Star Road, which grants wishes to people across the entire world, breaking it and causing it to split up into seven different pieces. Mario, along with his new friends, then set out on a journey to retrieve the seven pieces of the Star Road and defeat the Smithy Gang.

With this story, Squaresoft proved once again that it was one of the best story tellers in the industry at the time. It's a captivating and entertaining tale, complete with charming and humorous moments that will have you actually laughing out loud. The writing is great too, with each major character being memorable because of distinct and unique personalities. The only qualm with the writing is the fact that Princess Toadstool is kind of pathetic and annoying for the first portion of the game, which lasts quite awhile. The only thing she does is cry and beg Mario to save her, and that's not an exaggeration.

Along with the enthralling story is equally enthralling gameplaying mechanics. Super Mario RPG is obviously a roleplaying game, complete with the traditional aspects of the genre like turn based battle mechanics, special attacks, experience, and armor. As Mario journeys across the world, he meets up with friends that join his party and offer different abilities in battle. By the end of the game, you have a party of five characters, but only three can participate in battle. It would be a fine limitation if you could take Mario out of the party, but you can't. It is kind of frustrating when you want to have three specific characters other than Mario battle, only to be told that you can only pick two of the three.


An interesting facet of the battle system is when it comes to magic attacks. Like many other RPGs, there are specific points allocated to using magic attacks, and it Super Mario RPG, they're called Flower Points. What makes it interesting is that each character shares the same pool of points. If there are only five Flower Points left, and Mallow uses all five points, then Mario can't use any special attacks. Likewise, if Mallow uses an item to restore all the Flower Points, then the pool is restored fore everyone.

Although it does use many tried and true gameplay mechanics, the game does set itself apart from other RPGs when it comes to a certain aspect of battling, which is timed battle mechanics. If you press A right before your attack hits an enemy, you'll actually do more damage than normal. Similarly, if you press B right before an enemy's attack lands on you, you actually defend and the attack does less damage than normal. While this concept has been seen in other Mario RPGs since, Super Mario RPG was the first game to do it, so it does deserve some props.

Another part of Super Mario RPG that allows it to differentiate itself from other traditional RPGs from its era is the fact that it doesn't have any random battles. Every enemy can be seen on screen, allowing you try to avoid them if you want. It's not that easy though, as some enemies will chase after you, and in tight corridors, it's harder to avoid enemies than it would be in large, open areas. Again, it's something that Paper Mario and Mario and Luigi have done, along with other modern RPGs, but back in the 90s when Super Mario RPG was released, it was a rarity, so it does deserve some credit.

There is one aspect of battles that hasn't been replicated by its spiritual successors. After killing an enemy, they may drop a flower that either heals the character that struck the final blow, or they may drop a flower that raises said character's defense or attack for the remainder of the battle. It's an interesting addition to the more traditional flow of battles, but they can make the game too easy sometimes. The drops aren't that rare, and you'll find yourself holding off on healing items in hopes that an enemy will fully heal a hurt character.

Despite a large amount of Super Mario RPG's gameplay being centered around battles, there are a few aspects of the game that exist outside of battle, the first of which being that there are two different kinds of coins. Coins are the currency used in the game, and normal gold coins are the main coins that you use throughout the game, but there is a second kind of coin called a frog coin. Frog coins are green and are used to buy rare items that are sold by frogs and tadpoles. Overall, the frog coins end up feeling kind of useless since they can only be used at two locations in the entire game, and you don't even really need the items the frogs and tadpoles sell you. It would have been nice if there were more stores that accepted frog coins as a currency.

Another part of the game that takes place in the overworld are minigames. There are only a few in the game overall, but they are nice additions to pass the time with if you ever get bored of playing the main story. Most of the prizes won in the minigames are only coins, but a few do have some nice prizes that are worth playing for.

One of the reasons you would want to play these minigames other than to win prizes or to pass time is to look at the various locales in the game. Super Mario RPG's graphics are still extremely pleasing to the eye, with colorful and diverse areas to look at. The game uses 3D models for everything, and they withstood the test of time brilliantly. The same goes for the music. Even though many aspects of the gameplay have been surpassed by other modern RPGs, the music in Super Mario RPG still stands out as some of the best in a Mario game. Many of the songs are addicting and catchy, and you'll find yourself humming them hours after the game has been turned off.


Concluding Thoughts
Super Mario RPG is a wonderful traditional roleplaying game. It didn't take many risks, but everything about it still holds up sixteen years later. The music and graphics are still top notch, and the gameplay is still exceptional. While it has been surpassed by its spiritual successors in many ways, it's still a great game to play if you have a Wii or SNES sitting around your house. It is the most traditional RPG out of all the Mario RPG games, meaning people who love and grew up with games like Final Fantasy would probably enjoy this game more than Paper Mario or Mario and Luigi.