Since I didn't have a review up the last two days, this review is going to go up over an hour early. Sorry about that! 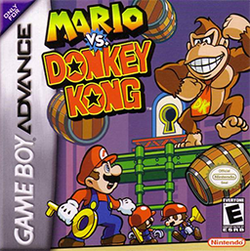 The Gameboy Advance is an odd Nintendo platform in the sense that it never received an official entry into the Super Mario franchise that was unique to the platform. The games featuring Mario on the GBA were remakes and ports of old games or spin offs. In fact, the GBA didn't even have a Mario platformer until 2004, when Mario vs. Donkey Kong was released. However, the first and only platformer freaturing the plumber on the GBA got overshadowed by the release of the Nintendo DS, which came out only a few months after the 2004 game.

In Mario vs. Donkey Kong, Donkey Kong is flipping through the channels on his television when he comes across a commercial for the new Mini-Mario toy. He decides he wants them, and goes to the store only to discover that they're all sold out. Luckily for the ape, the factory that produces the toys is right across the street from the store, and he steals all the Mini-Mario toys from the factory. It's Mario's job to retrieve the stolen toys and return them to the factory.

I feel like a broken record saying this, but the story is good enough. It's okay for Nintendo standards and gives you a reason to play through the story mode. Mario games and Nintendo in general aren't really known for their elaborate stories, so to expect one in this game is ridiculous. And again, the meat of Mario vs. Donkey Kong is in the gameplay, not the story.

The 2004 Gameboy Advance game is broken up into six different worlds, with eight different levels within each world, all of which are timed. Six of the levels in each world play similarly and are basically platformers with puzzle elements. The six levels themselves are broken up into two different areas. In the first area, you have to navigate around enemies and obstacles while pressing different colored buttons that open up new paths in order reach a key that unlocks a door, which is your destination. The second area is similar to the first, but instead of finding a key that unlocks a door, you have to reach a Mini-Mario toy.


Within each of these six levels are three differently colored presents. If you collect all three, you play a bonus game at the end of the level where you play for extra lives. It's a nice idea, but you end up playing the same bonus game over and over again, and it ends up getting boring after the second world. There is a second bonus game, but it's much rarer and you won't come across it as often.

In addition to collecting presents in each level, you also want to gain points. You do that killing enemies and collecting the previously mentioned presents. Time remaining on your clock at the end of each level also adds to your point total, so you find yourself trying to beat the levels as fast as possible. If you collect enough points in each level, you can unlock an extra mode at the end of the game, which adds nice replay value.

The six main levels in each world are extremely fun to play due to their mixture of platforming and puzzles. The game also manages to keep things fresh too, introducing something new in almost every level. There is an issue with Mario's jumping though. It doesn't feel like he jumps that high, and it feels like gravity is extremely strong in Mario vs. Donkey Kong. It takes some getting used to just because the jumping isn't anything like the other games in the Mario series.

The other two levels in each world are extremely different from the other six. In the first of the two other levels, you have to guide all six Mini-Mario toys through an obstacle course to a box at the end. Along the way, you have to collect three letters that spell out the word "Toy" before you can open the box. These levels can be fun, but every now and then a Mini-Mario toy will get stuck off screen and you'll find yourself hurrying back to retrieve it. These levels have less time on the clock than the other six, so it does get a little annoying having to go back to get a toy.


The second level of the remaining two is a boss fight against Donkey Kong. They are fun and they do get progressively more difficult, but they aren't hard enough that you actually die or get close to dying. It would have been nice if Donkey Kong were able to get you within a couple hits of killing you or actually able to kill you.

Each of the eight levels in each world don't take that long to complete, and as a result, the game is on the short side. You can beat the main game in a couple of hours, and the extra modes you unlock won't last you that much longer. You can always go back and try to beat each level faster than your previous attempt, but once you unlock the extra modes at the end, there's little incentive to go back to each level.

The graphics in Mario vs. Donkey are great for the GBA. Mario, Donkey Kong, the enemies, and the Mini-Mario toys are prerendered 3D models, very similar to the Donkey Kong Country series. They look great, and they fit nicely with the colorful and varying backgrounds. The music on the other hand is extremely bland and forgettable. When you finish a level, you won't even remember what song had just played over the previous few minutes. It is kind of disappointing considering even Mario spinoffs have nice music.

Concluding Thoughts
Mario vs. Donkey Kong is a fun puzzle platformer to waste a weekend on, but it's nothing substantial that will last you a long time. You can extend the length of the game by going back and trying to collect as many points as possible in order to unlock additional modes, but even that won't last you more than one weekend. The game is nice to look at though, even though the music isn't nice to listen to.